On 19 October 2015, an event took place in Dubai, which is organised annually by Kodak Alaris, to celebrate both the company’s own achievements as well as the achievements of its partners. The gala dinner was followed by an awards ceremony presented by David Whitton, Regional Sales Director for Middle East and Africa, who said the following: “We are extremely happy and honoured to work with such an outstanding ecosystem of partners. They have made a very important contribution to the success and growth of Kodak Alaris in the region. The annual awards are a way of rewarding our partners who have been working with us for years”.

Mikrografija thus became Project of the Year 2015 for the territory of East Europe. Today, on 21 April 2016, Balint Rozgonyi of Kodak Alaris handed the award to Boštjan Gaberc, Mikrografija’s Director, and Lucija Rebernik. The entire Mikrografija team is pleased to have been recognised as the top partner within the region; this will motivate us in our efforts to justify the title and further nurture a productive relationship with Kodak Alaris. 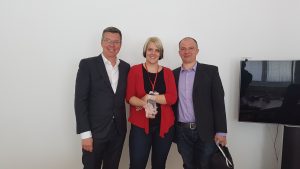 Be up-to-date with what’s happening in Mikrografija!